The avocado (Persea americana) is a tree native to Mexico and Central America,[2] classified in the flowering plant family Lauraceae along with cinnamon, camphor and bay laurel. Avocado or alligator pear also refers to the fruit, botanically a large berry that contains a single seed.[3]

Avocados are commercially valuable and are cultivated in tropical and Mediterranean climates throughout the world. They have a green-skinned, fleshy body that may be pear-shaped, egg-shaped, or spherical. Commercially, they ripen after harvesting. Avocado trees are partially self-pollinating and often are propagated through grafting to maintain a predictable quality and quantity of the fruit.

The fruit of horticultural cultivars has a markedly higher fat content than most other fruit, mostly monounsaturated fat, and as such serves as an important staple in the diet of consumers who have limited access to other fatty foods (high-fat meats and fish, dairy products).

A ripe avocado yields to gentle pressure when held in the palm of the hand and squeezed. The flesh is prone to enzymatic browning, quickly turning brown after exposure to air.[46] To prevent this, lime or lemon juice can be added to avocados after peeling. 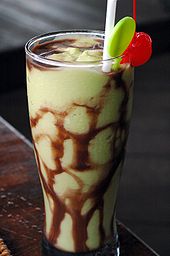 The fruit is not sweet, but distinctly and subtly flavored, with smooth texture. It is used in both savory and sweet dishes, though in many countries not for both. The avocado is popular in vegetarian cuisine as a substitute for meats in sandwiches and salads because of its high fat content.

Generally, avocado is served raw, though some cultivars, including the common ‘Hass’, can be cooked for a short time without becoming bitter. Caution should be used when cooking with untested cultivars; the flesh of some avocados may be rendered inedible by heat. Prolonged cooking induces this chemical reaction in all cultivars.[47]

It is used as the base for the Mexican dip known as guacamole, as well as a spread on corn tortillas or toast, served with spices.

Delivery available to all NN and LE postcodes, PE8 4 and PE8 5 as well as offering free collect from store.